I visited Lathcoats Farm on September 5th , and was welcomed by Phil, one of the owners, who met me at the nearest station. He showed me around and explained how the orchard used to be much bigger, but that nowadays the orchards on their own are not enough to make a living out of. So he now has a shop and a busy café, along with an animal area where children can see goats, pigs etc.

The apple trees are really lovely things, full of different colours of the various varieties, and this year has been a very good year for the apple crop. I went out earlier than arranged as that week pickers were busy filling their bags with apples to be loaded into wooden containers pulled by a little tractor ready to take them to the cold store, the shop or for distribution elsewhere.

There are also areas growing other fruits, such as cherries, but I concentrated on apples, as our brief suggested. The names of the apples and their taste characteristics are interesting, described like a wine list….taste and appearance are linked in interesting ways, I suppose that some of the more understated in appearance taste very good, but this is just my guess at present.

The pickers were very sociable and welcoming, despite their hard work. I think I might have lasted about half and hour doing apple picking. You have to be carefulhow you empty the bag too, or the apples will bruise. 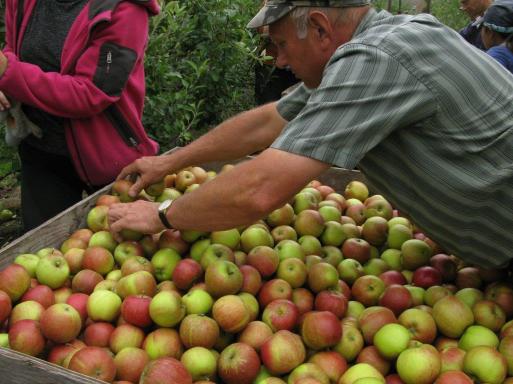 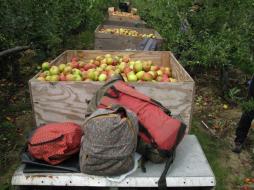 I did some sound recording, took lots of pictures, and got some ideas to work on. I also sampled the nice gluten-free food available in the café, which was really busy. I was quite surprised at how many people visited it, and also the shop was pretty impressive. If I lived nearby I’d definitely be a customer. I bought a plant and took it home to the garden.

After listening to my sound files, I have got more questions for Phil, and am now waiting for two books on apples which I ordered online to be delivered. Also researching wassailing songs online….I’m going to try to write a song for Lathcoats orchard so am doing more research and letting things “brew” for a few days so see what develops.