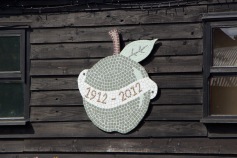 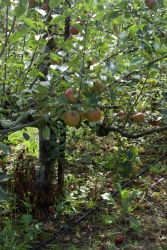 This weekend we visited Lathcoats Farm, which finds itself on the outskirts of Chelmsford, Essex. It is about an hour and a half train ride from London, which makes a great day out away from the city. It is a third generation farm, run by the same family since 1912.

Lathcoats is a Pick Your Own (PYO) farm, where depending on the season you can pick plums, strawberries, raspberries, gooseberries, blackcurrants, redcurrants, cherries, blackberries and boysenberries. Lathcoats also have an Orchard Experience, where you can sponsor an apple tree in their orchard and the fruits it yields that season are yours to pick. They grow over 40 varieties of apples available to buy at their farm shop. The farm shop also sells a wide selection of other produce from the farm and local neighbouring Essex farms. You’ll be able to find everything from jams, fruits, and vegetables to fresh bread and local delicacies. Five years ago Lathcoats also converted one of their beekeeping sheds into a coffee house where you can enjoy freshly made food.

When you visit the farm you will also be able to see many animals. They foster two donkeys; have chickens, guinea pigs, pygmy goats, pigs, rabbits and a turtle. We saw lots of families with young children enjoying their time at the farm, learning about the natural world and where food comes from. 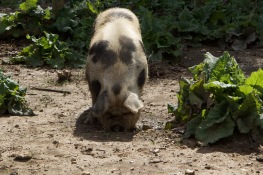 You can taste apples before buying at the farm shop

Selection of fruits available at the farm shop

We were very lucky to be welcomed by Philip Taylor, who co-runs the farm alongside his brother, Stephen Taylor. Philip gave us some insights about the history of the farm and the changes that have happened according to supply and demand trends during the years.

First, he showed us the three oldest apple trees at the farm, which were planted by his grandfather in the 1920s. These trees used to be part of a bigger orchard that has been replaced by a car park for the public. This is because the farm changed its business in the 70s from supplying to supermarkets to Pick Your Own. This shift happened because supermarkets became increasingly difficult to negotiate with, as they had (and still do) so much choice of produce to choose from abroad and the UK – this does not give smaller commercial farms a good bargaining position.

The way apple orchards are grown and planted has changed quite significantly since his grandfather planted these first trees. For instance, the space in between the trees was wider, the size of the trees were bigger (they were given much more space for their big branches), the equipment to pick apples, etc.

Philip showing us around the apple orchards

Pumpkins ready for the autumn

3 oldest apple trees in the farm

3 oldest apple trees in the farm

Philip and Stephen’s farm is a commercial farm, but they function on a very different basis from neighbouring commercial apple orchards. Aside from the PYO, their orchards look very different from commercial suppliers. Phil’s orchard houses many varieties, which are handpicked every harvest (happening this week) and they employ locals and students in search of a summer job.

We carried on our tour through the current orchard, one that is off-limits to the public due to health and safety reasons. The tractors used for apple harvest have rows of collecting bins attached to them. The driver rides slowly through the lanes, as the pickers each get a bin and collect the apples as they are moving along. These tractors are beautiful and quite old, Philip told us that he got lots of requests for photo shoots for them. Right now though, the tractors are putting their modelling career on hold and focussing on the ripe fruits.

We were surprised at the redness of some of the fruits. Harvest is quite early this year, one of the earliest harvests the farm has ever seen. Their strawberry picking began in May! Philip explained that ripening in apples is accelerated by cold nights and sunny days, which if you are in England you will know has been the case for more than a week now. He took us through rows of different apple sorts, explaining their different textures, uses and tastes to us. We were really impressed by the size of the Bramley cooking apple, which can be bigger than a hand!

After visiting Lathcoats and speaking with Philip we learned that there are initiatives that put an emphasis on supplying the local community with affordable, fresh and sustainable produce. It is very important for all consumers to search and seek out these places. Smaller commercial farms that trade nationally and locally, will not be as affected by policy changes around export and import from Brexit. However Philip is still uncertain about how Brexit might affect and in turn change his farm but only time will tell. In the end, it will all depend on how his community and businesses are affected.

We want to thank Philip for showing us around his beautiful farm and explaining how Lathcoats functions! We were very inspired and enjoyed some of the tastiest apples we have ever tasted. The farm is open Monday through Sunday, except Bank Holidays. It is accessible by bus, which stops right in front of the farm (bus 42 and 42A). To find out more you can visit their website.

If you’d like to support our project it is one of the last days to donate to our Crowdfunder for our London exhibition: https://www.crowdfunder.co.uk/a-is-for-apple-summative-exhibition.